Ah, Thanksgiving is a wonderful Holiday. Family and friends congregate to enjoy each others' company and to share and enjoy delicious food. Turkey, mashed potatoes and gravy, stuffing...sweet potatoes, corn, peas...pumpkin pie, apple pie, candy-bar pie...Yumminess.
We spent our holiday with Jerry's brother James and his family in Columbus, Georgia. We played games, sat around the house talking, playing with the kids, and shopping. Katie and Ruth went to see Tangled while Jerry and James "took care of things around the house."
And then disaster struck.
((Cue suspenseful music))
Friday night started off nice. Jerry, Katie, James and Ruth went to see Unstoppable while the kids stayed home and watched movies and went to bed. When we returned Jonah and Oliver were both asleep; Oliver in the porta-crib and Jonah on a spare mattress, his head and torso on the floor, while the rest of him lay on the bed. (He was in one piece, don't misread that!) Jerry put him back in bed and pulled up the covers and then he and Katie went to bed.
And then, like the warning of flames spitting up from the 'Fire Swamp', Jonah's stomach began summoning his digestive system to give up their contents and BAM!
Jonah was throwing up.
Katie and Jerry took turns on watch, listening for the warning of Jonah needing to throw up. Burp and gurgle-- get him over the bowl--heave. It was a gruesome and sleepless night for all of us. Except for Oliver who slept quietly in the adjacent room.
Jonah's stomach was as true as Old Faithful and every 20 minutes Jerry or Katie was at his side holding him over the bowl. Bless his heart. If he could, he would have slept through each episode. In fact, he probably did every time after 2 am.
When 7 am finally came around, Oliver began crying and Jerry went to get him only to find that his Aunt Ruth had already gotten him and had taken him to the bathroom because, yeah, he too, had the bug and was throwing up. Thank goodness he slept the whole night, otherwise, this night would have been doubly-disastrous.
Thank goodness, the severity of it all had passed by this point and all of them, especially Jonah, Oliver, and Katie, got some much needed naps that afternoon. Until Katie got sick too.
It was a long, long 5 hour drive home from Columbus.

Posted by Jerry at 7:14 PM 1 comments Links to this post

I didn't really do too much shopping today. But I did see two movies! Yay, I love movies.

Summary:
The long-haired Princess Rapunzel has spent her entire life in a tower, but when she falls in love with a bandit who was passing by she must venture into the outside world for the first time to find him.

My Thoughts:
I loved this movie and give it four stars! It was clever, smart, funny, romantic, and beautifully done. It really had that Disney magic feel to it which I haven't felt a lot of their more recent films have had (except The Princess and the Frog, but I actually liked Tangled better.)

Later we left the kids home and just the adults went to see Unstoppable starring Chris Pine and Denzel Washington:

Summary:
With an unmanned, half-mile-long freight train barreling toward a city, a veteran engineer and a young conductor race against the clock to prevent a catastrophe.

My Thoughts:
This movie was pretty intense, but definitely primarily an action flick and I give it about 2 1/2 stars. It was a mixture of Speed and Training Day. I was riveted and totally engrossed the entire time, but they really really didn't develop the characters as much as they should have.

Posted by Katie at 9:19 PM 0 comments Links to this post

Summary:
For thirty years as a musician, Rosanne Cash has enjoyed both critical and commercial success, releasing a series of albums that are as notable for their lyrical intelligence as for their musical excellence. Now, in her memoir, Cash writes compellingly about her upbringing in Southern California as the child of country legend Johnny Cash, and of her relationships with her mother and her famous stepmother, June Carter Cash. In her account of her development as an artist she shares memories of a hilarious stint as a twenty-year-old working for Columbia Records in London; recording her own first album on a German label; working her way to success; her marriage to Rodney Crowell, a union that made them Nashville's premier couple; her relationship with the country music establishment; taking a new direction in her music and leaving Nashville to move to New York; motherhood; dealing with the deaths of her parents, in part through music; the process of songwriting; and the fulfillment she has found with her current husband and musical collaborator, John Leventhal. Cash has written an unconventional and compelling memoir that, in the tradition of M. F. K. Fisher's The Gastronomical Me and Frank Conroy's Stop-Time, is a series of linked pieces that combine to form a luminous and brilliant whole.
My Thoughts:
I am actually one of the few people who was familiar with Rosanne Cash long before I knew who Johnny Cash was. My mother listened to pop country music while I was growing up, but openly confessed that she hated "old" country music (like Johnny Cash). So I knew very well who Roseanne Cash was from a very early age. In fact, when I first became interested in music at about the age of 9 or 10, the tapes that I took from my mom and listened to constantly were Rosanne Cash-Kings Record Shop, the Footloose soundtrack, every Judd's Album, and Anne Murray (don't ask me where that last one came from-like I said, I was figuring out music) I am now a huge Johnny Cash fan, and probably listen to him more than Rosanne Cash, but I still like both. However, all this really has nothing to do with this book so...
This was a beautiful memoir of Rosanne Cash's life up to this point (she is 55 now). It was very interesting to learn about the life of the daughter of a music legend who also had her own success and had fame based on her own talent as a songwriter and singer. She speaks about her struggle when she was younger to be judged on her own merits and not because of who her father is. Now that she is older she is starting to embrace it more, which comes full circle from when she started in life. I was surprised about how much she did talk about her father in the book because of her concern of living in his shadow, but I am so glad that she did. The parts talking about her father were some of my favorite parts of the book. I really enjoyed learning about how good of a father he was and his parenting style of always being there for her if she needed it, but never giving unsolicited advice. Even when he was strung out, he could still dig down deep and tell her exactly what she needed to hear. I am fascinated by the father/adult daughter relationship because I have no personal experience draw from.
She has a really good use of language, but at times she seems to use a lot of words to not say very much. I like a bit more plot and stories and a little less introspection. If this was someone I knew personally, I think those parts would mean a lot more to me. And they were appropriate, considering that this is a memoir, but being a published book for the public, it gets a bit too sentimental for me.
If you are a big fan of Johnny or Rosanne Cash, then you'll really enjoy this book, but if not then you might not care to read it.

Posted by Katie at 1:10 PM 0 comments Links to this post

Random thoughts on my way out the door

I need to blog, but I'm on my way out the door. I going to Columbus for Thanksgiving. I'm hoping to finish two books that I'm reading and I will hopefully have book reviews coming soon.

I went bowling yesterday for the first time in like 5 years. It was pretty fun. Jonah only lasted for about 5 frames. I had the amazing score of 85, and yes, that is WITH bumpers. Man I am really bad at bowling.

Then I went to give blood. They called me and asked me to come donate. With the upcoming holiday they really need blood, especially my type. I haven't been able to donate for about 3 years because I've been pregnant or breastfeeding, so it feels really good to be able to donate again. You should donate too, if you can. It really isn't scary and you can save 3 lives! I know this all sounds like a Red Cross commercial, but really think about if something were to happen to you or your kids and you needed blood. Wouldn't you be grateful that someone donated for you? Just something to think about.

Have a wonderful THANKSGIVING!!!

Posted by Jerry at 9:15 AM 0 comments Links to this post

I love the Library. I could spend hours and hours there and never get sick of it. I can browse shelves and look through books and never feel satisfied. In fact the more books I look at the more books I want to read. Yesterday I went and ended up buying 6 books to add the the stack of 15 (yes 15) books that are already on my bedside table waiting to be read.

Lately I've really wanted to start reading some classics, because there are really very few that I've ever read. I only finally read Pride and Prejudice last summer, and To Kill a Mockingbird a couple months ago. Right now I'm reading my first Dickens-Great Expectations which I'm really enjoying. Although, it isn't exactly a book that "I just can't wait to get home or get the kids to bed so I can read" kind of book. Whenever I pick it up, I enjoy it, but it's definitely been slow going. Yesterday I bought two books that are on my list to read "someday". Anna Karenina by Leo Tolstoy, and Selected Stories of Franz Kafka. I've always wanted to read something by Kafka but I hope that I chose a good one.

Posted by Katie at 12:33 PM 4 comments Links to this post 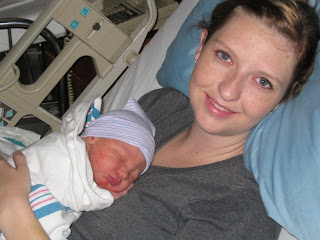 My sweet baby Oliver turned 1 yesterday and I just can't believe it. Not only did it seem to go faster than Jonah's first year (because all successive years seem to pass by quicker than the ones before to me) but Oliver hit almost every milestone about 3 months sooner than Jonah did. He is the most fun baby. He has such a charming personality. He has the best smile and he is probably about the MOST wiggly baby there ever was (I'm not exaggerating, changing his diaper or clothes takes two people) but you can't help but smile when your wrestling him because he thinks it is just about the funniest thing ever.
Happy Birthday Ollie! 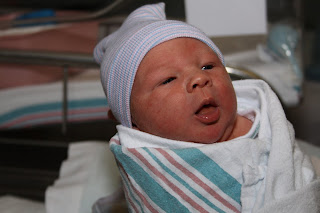 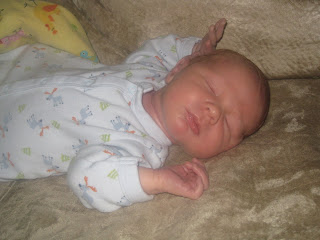 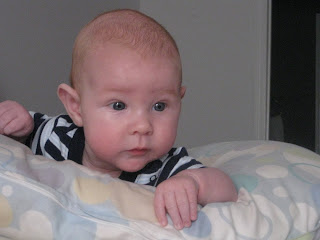 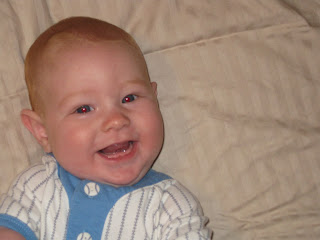 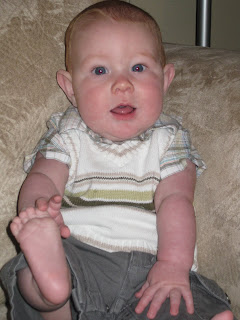 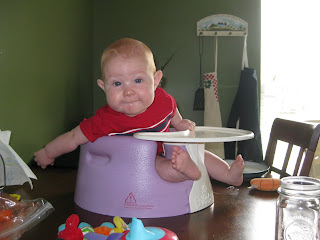 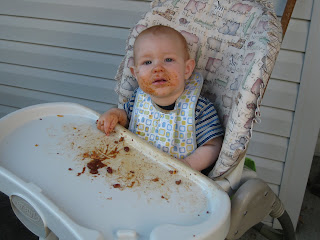 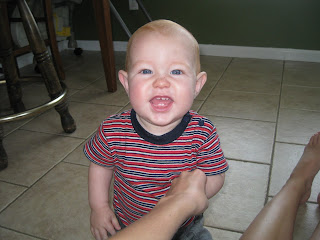 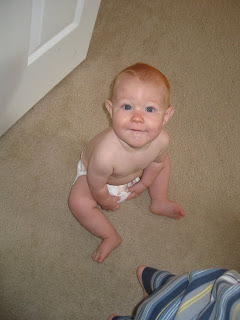 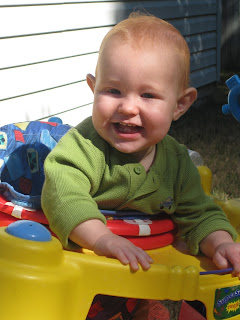 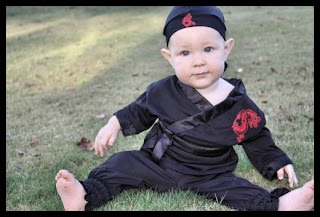 Posted by Katie at 7:20 PM 2 comments Links to this post

I was doing so well and I missed posting yesterday! I'm so disappointed in myself. However, I think I do have a pretty good excuse. Yesterday we had a birthday party for Oliver who turns 1 today! I was so busy all day yesterday getting ready for his party, and then busy partying hard that I completely forgot about the blog and NaBloPoMo. Oh well, if I had made it through the whole month perfectly, that just wouldn't be like me, because hey-I ain't perfect. So maybe I'm kind of glad I missed a day. Because perfection is boring.

Posted by Katie at 7:08 AM 2 comments Links to this post