10k and back to racing 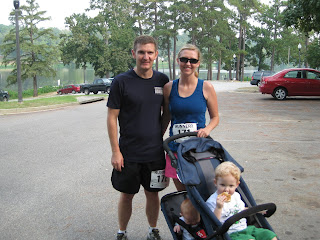 Saturday I ran my first race in 3 1/2 years. My long running absence was due to a lot of things. During that last race, in January of 2007, I got a stress fracture on my left foot. 2 weeks after I was cleared to start running again, we moved to Jordan for a summer (if you've been there, you'll understand why it isn't a place that that anyone-especially women- can just walk out of the front door to go for a run). During that summer I became pregnant with my first son, Jonah, and then soon after with my second son Oliver. Anyway, my point is that it's been a long time and it feels really good to be running again with nothing standing in my way (other than good old lack of self motivation, but at least that can be easily overcome each day).

So on Thursday evening, I decided I would run the Miracle Miles 10k, which was a fundraiser for MCG Children's Hospital. Oliver received some top notch care there back in January also, my good friend Robyn's baby spent a considerable amount of time there. So, besides wanting to contribute to the facility where Oliver and my friend's baby were treated, I needed to do a run for my Half Marathon Training.

So I was going to run with my friend Robyn and Jerry was going to watch the boys. Unfortunately, early Saturday morning, Robyn's husband became very sick, so she wasn't able to come. 10 minutes before we were supposed to leave Jerry decided to run with me (in Robyn's place) pushing the boys in the stroller. I love that my husband is a crazy dedicated runner that can just decide to run a 10k at a moments notice. We also met my friend Shari there who is going to run the half marathon with me in October. We had a great Saturday morning together, and I finally got to start racing again. Only 7 weeks until the Half Marathon!!!!

Posted by Katie at 7:12 PM 4 comments Links to this post