We finally got a video of Oliver walking. Watch his expression at the end. His eyebrows kill me!

Posted by Katie at 12:00 PM 3 comments Links to this post

I love both these TV shows, and I am so pleased that they both did a tribute to this awesome song. I love the choreography on the Glee version. It makes me want to spontaneously start dancing in public places.

Posted by Katie at 8:21 PM 0 comments Links to this post

I repainted Oliver's room back in June, when I also painted my room. I haven't posted pictures because I've been dragging my feet finishing his room. I completed another phase a couple of days ago, so I'm just going to post pictures now, even though it's far from complete. But really, I have no idea when it will be complete. Finding the time and money to do what I really want is going to take a while.

Here are the before pictures: 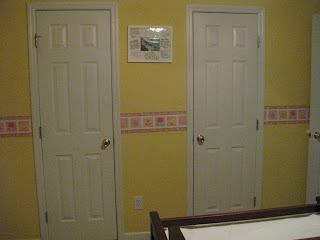 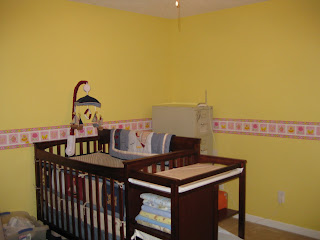 With a cute girl-y flower and butterfly wallpaper border. 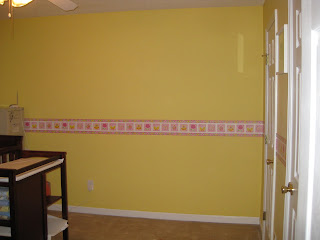 The after pictures:
Just a little bit more boyish for my little man 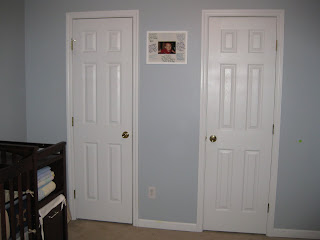 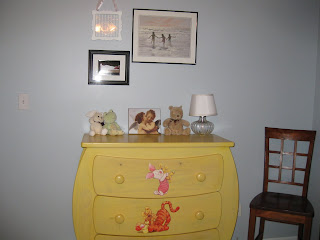 I know these pictures aren't great, but I am having a really hard time taking good looking pictures of things that aren't people. 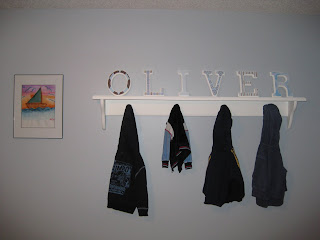 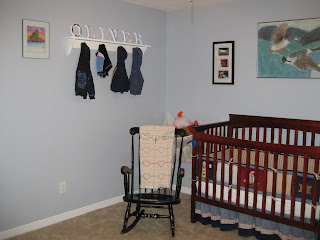 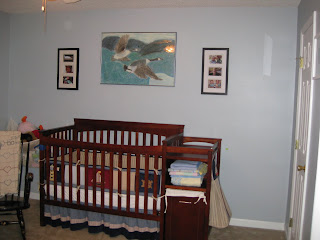 I still need to:
-paint the rocking chair
-get a new curtain (there isn't a picture, but it's RED right now)
-the lighthouse bedding set (crib bumpers, diaper holder, crib skirt) stuff will go very soon.
-I will probably also paint the Pooh Bear dresser, or get him a new dresser within about a year. I can't decide. It's SO cute, so I hate to paint it, but it's just not quite my style. Maybe I'll just get him a new dresser, and save the cute Pooh Bear for a baby girls room (someday, far in the future) I do like the yellow and blue colors together, though.
-he also needs a toy chest or bench

Anyway, even though it isn't perfect, it is a vast improvement. I LOVE how the color turned out and it's now my favorite room in the house.

Posted by Katie at 6:29 PM 1 comments Links to this post

Summary:
James Kier looked back and forth between the newspaper headline and the photograph of himself, not sure if he should laugh or call his attorney. It was the same photograph the Tribune had used a couple of years earlier when they featured him on the front page of the business section. While the photograph was the same, the headlines could not have been more different. not many people get to read their own obituary.

LOCAL REAL ESTATE MOGUL DIES IN AUTOMOBILE CRASH
Utah real estate developer James Kier was pronounced dead after his car collided with a concrete pylon on southbound I-80. Authorities believe Keir may have had a heart attack prior to swerving off the road. Kier was the president of the Kier Company, one of the West's largest real estate development firms. He was known as a fierce, oftentimes ruthless, businessman. He once said "If you want to make friends, join a book club. If you want to make money, go into business. Only a fool confuses the two." Kier is survived by his son, James Kier II, and his wife, Sara.

Kier put the paper down. He had no idea what the article was about to set in motion.

My Thoughts:
This was an extremely quick read and a good Christmas spirit story. It is very much like Dickens A Christmas Carol, so it was pretty predictable. However it was an interesting book that I couldn't put down. I really like the idea of a character not only reading his own obituary (which are usually always positive) but that he saw a message board on the newspapers site under the article about his death (which was brutally honest and even cruel). Kier tries to make amends with people that he has viciously hurt and ruined their lives through his ruthless business practices. He really starts out to change his image, but throughout the process of restitution, he changes himself and wants to do what is right because he is ashamed and wants to be a good person. It's very intriguing to think about what people will say about me when I die, and a good reminder of how I should be living my life right now, and of the true meaning of Christmas.

Posted by Katie at 3:31 PM 0 comments Links to this post