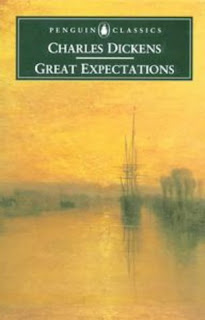 GREAT EXPECTATIONS by Charles Dickens
Summary:
Dickens considered Great Expectations one of his "little pieces," and indeed, it is slim compared to such weighty novels as David Copperfield or Nicholas Nickleby. But what this cautionary tale of a young man raised high above his station by a mysterious benefactor lacks in length, it more than makes up for in its remarkable characters and compelling story. The novel begins with young orphaned Philip Pirrip--Pip--running afoul of an escaped convict in a cemetery. This terrifying personage bullies Pip into stealing food and a file for him, threatening that if he tells a soul "your heart and your liver shall be tore out, roasted and ate." The boy does as he's asked, but the convict is captured anyway, and transported to the penal colonies in Australia. Having started his novel in a cemetery, Dickens then ups the stakes and introduces his hero into the decaying household of Miss Havisham, a wealthy, half-mad woman who was jilted on her wedding day many years before and has never recovered. Pip is brought there to play with Miss Havisham's ward, Estella, a little girl who delights in tormenting Pip about his rough hands and future as a blacksmith's apprentice.

I had never thought of being ashamed of my hands before; but I began to consider them a very indifferent pair. Her contempt for me was so strong, that it became infectious, and I caught it.

It is an infection that Pip never quite recovers from; as he spends more time with Miss Havisham and the tantalizing Estella, he becomes more and more discontented with his guardian, the kindhearted blacksmith, Joe, and his childhood friend Biddy. When, after several years, Pip becomes the heir of an unknown benefactor, he leaps at the chance to leave his home and friends behind to go to London and become a gentleman. But having expectations, as Pip soon learns, is a two-edged sword, and nothing is as he thought it would be. Like that other "little piece," A Tale of Two Cities, Great Expectations is different from the usual Dickensian fare: the story is dark, almost surreal at times, and you'll find few of the author's patented comic characters and no comic set pieces. And yet this is arguably the most compelling of Dickens's novels for, unlike David Copperfield or Martin Chuzzlewit, the reader can never be sure that things will work out for Pip. Even Dickens apparently had his doubts--he wrote two endings for this novel. --Alix Wilber

My thoughts:
4 stars! It took me a while to really get into this book. I enjoyed it while I was reading, but it wasn't a book that I felt very motivated to pick up, at first. Once I was about half way through, I downloaded the audio version, and then I couldn't stop listening/reading. The reader (Martin Jarvis) was the best audio book reader I've ever heard! He did every characters voice completely unique. It was almost like listening to a play with each character read by a completely different person. Anyway, this isn't a review about the audio book reader so, here is my review of the book.

It is such a perfectly written book. I loved the character development. Pip isn't the same person at the beginning, middle, or end of the book. Dickens writes such a believable, although not always likable (at least in the middle of the book), character in Pip. Miss Havisham is written so eccentric and weird you get the sense that even though Estella was raised by her, Miss Havisham still kinda gives Estella the creeps. My favorite character is Wemmick. He is hard, cold, and cynical when he is at work in town. When he is home, he is fun, playful, lighthearted, and pleasant . Literally a split personality, and he acknowledges it. Joe was so endearing, and sweet. I found myself wishing he and I were "the best of friends"I also wanted to just yell at Pip or slap him for being such a jerk to Joe. It was also interesting to read about how important social class was during this time in England, it was literally everything and now in our current world this really isn't hardly an issue at all.
This was so worth reading!

Posted by Katie at 6:30 PM 2 comments Links to this post

"Failure stripped away everything that was non-essential in me"
"Rock bottom became the solid foundation on which I rebuilt my life" -J.K. Rowling.

I am going to DARE to fail in 2011! No more inaction or fear. I'm going to run a half marathon in April. I failed to do it this year (2010) because of a broken toe, but I'm not giving up, ever! (I just hope I don't have to break all my toes before I finally do it;) Oh, does anyone want to run with me?

What are you going to DARE to do this year?

Posted by Katie at 7:22 PM 0 comments Links to this post